The political, commercial and cultural hub of Nepal is the first stop for the majority of visitors to the country. Once a separate kingdom in itself, it contains three fabled cities - Kathmandu, Patan and Bhaktapur. Out of ten UNESCO World Heritage Sites, seven cultural heritage sites are in Kathmandu Valley. The history of the Valley begins with the Buddhist saint Manjushree who slashed a passage through the surrounding hills to drain out the primordial waters and make it inhabitable. Over the centuries, a refined urban civilization emerged, built on a unique synthesis of Hinduism and Buddhism.

Dynasties came and went. Trade and the arts flourished. Its deeply religious Newar inhabitants built fabulous cities and artistic temples that attracted devout pilgrims as well as rampaging invaders. In the late 18th century, following the founding of modern Nepal within more or less the present boundaries, Kathmandu was made the capital. Kathmandu, the largest city in Nepal is situated at an altitude of 1,350m.

Boudhnath stupa, situated about 5 kilometers north east of the city center of Kathmandu is the biggest Stupa in Nepal terms of height and expansion. The Stupa is known as Khasti Chaitya, Khasau Chaitya and Khasa Chaitya. The Tibetan name of the stupa is JYARUNG KHASYOR. UNESCO World Heritage committee Convened in Cairo in 1979 accepted and approved the proposal of Nepal and enlisted Boudhanath stupa in the World heritage list and has become the become the property of World heritage. Now which is enhanced the importance of the area. Since few years the Entry fee there : 100 Rupees (SAARC nationals Rs. 50).per person.

Watches over the Valley from the top of a hillock on its western side just three kilometers west of t he city center. The stupa is one of the holiest Buddhist sites in Nepal and its establishment is linked to the creation of the Kathmandu Valley out of a primordial lake. Swayambhu is also known as Samhengu and is listed as a World Heritage Site. It is also one of the oldest and glorious Buddhist shrines in the world which is said to be two thousand years. The four sides of the stupa is painted with the eyes of Lord Buddha and the temple is also known as the watchful eyes of Buddha. Entrance fee Rs. 100 (SAARC nationals Rs. 50). 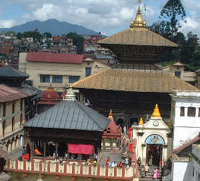 One of the most sacred Hindu shrines in the world, Pashupatinath lies 5 km east from the city center. The richly-ornamented pagoda houses the sacred linga, or phallic symbol, of Lord Shiva as well as the noteworthy gold plated roofs and silver coated doors. This is the abode of God Shiva and is the holiest of all the Shiva shrines. Religious pilgrims and sadhus, like the one pictured here, travel all the way from the remote areas of India to visit this sacred sight, especially during Shivaratri (the night of Shiva) that falls between February/March. Even though these devotees have denounced worldly possessions, each carries a Sadhu ID (identifications card) to freely cross over the border between India and Nepal.

1) Chronicles indicate Pashupatinath’s existence prior to 400 AD. Devotees can be seen taking ritual dips in the holy Bagmati river flowing beside the temple, also a World Heritage Site. The crematorium is just outside the temple and it is a dream of almost every Hindu to be cremated by the side of Pashupati Ar yaghat after their death.Entrance fee Rs. 500. Per person. For foreign tourists.

This complex of palaces, courtyards and temples like Hanumandhoka Palace, Kumari Ghar (Abode of the Living Goddess), Taleju temple, built between the 12th and 18th centuries, used to be the seat of the ancient Malla Kings of Kathmandu. An intriguing piece here is the 17h -century stone inscription set into the wall of the palace with writings in 15 languages. The Durbar Square, protected as a UNESCO World Heritage Site, is the social, religious and urban focal point of the city. Even to date, all the major state and social ceremonies, including the solemnization of coronations are performed in one of the courtyards in this complex. There are also museums inside the palace building. There is an entrance fee of Rs. 250 for foreign visitors. Your ticket to the Square entitles you to visit all the museums.

Durbar Square, like its counterpart in Kathmandu, is an enchanting mélange of palace buildings, artistic courtyards and graceful pagoda temples. Listed as a World Heritage Site, the former royal palace complex is the center of Patan’s religious and social life, and houses a museum containing an array of bronze statues and religious objects. There is an entrance fee of Rs. 200 per foreign visitor. One remarkable monument here is a 17th century temple dedicated to the Hindu God Krishna – Krishna Mandir built entirely of stone with rare stone carvings on its walls depicting the epic wars from Ramayana and Mahabharata.

Durbar Square. As you walk in, you cannot but be overcome by a feeling of inner harmony. Such is the art and architecture and the special layout here. The Palace of 55 Windows built during the period of King Bhupatindra Malla in 1754 situated to the left as you enter through the city gate, inspires admiration. The National Art Gallery is also housed inside. The palace entrance, the Golden Gate known as Sunko Dhoka in Nepali is a masterpiece in repousse art. In front of the palace building is a medley of temples of various designs. Amongst the three Durbar Squares in the Valley, the Durbar Square in Bhaktapur is the best preserved one. There is an entrance fee of Rs. 50 for SAARC nationals and Rs. 700 for other foreign visitors.

Taumadhi Square lies to the east of Durbar Square reached by a narrow brick-paved lane. The towering five-roofed Nyatapol temple presides over the square. The monument gracefully soars into the sky atop a five-story plinth. The stairway leading up to the temple is flanked by stone figures of deities and mythical beasts, each 10 times more powerful than the one immediately below.

Dattatreya Square takes its name from the Dattatreya temple dedicated to a three-headed combination of the Hindu deities Brahma, Bishnu and Shiva. If you want to experience the feel of the traditional urban layout of Bhaktapur, Dattatreya Square is it. Set in a maze of streets lined with richly ornamented houses, the square is famed for its many ornate Hindu monasteries known as Math. The National Woodworking Museum is also housed here and the Brass and Bronze Museum is across the street. The oldest structure in Bhaktapur was raised during the reign of the last Malla King, Yaksha Malla who ruled the Valley before it was divided into three Kingdoms amongst his three heirs.

Potter’s Square. A two-minute walk south of Durbar Square brings you to Bolachhen, also known as Potter’s Square because of the many potters seen here moulding wet clay into different kinds of earthen ware. It has a display of fresh pottery left out to dry in the open square. This place can be approached from Taumadhi Square. The elephant-headed Lord Ganesh is the patron of potters, thus the Jeth Ganesh temple in the square.

Siddha Pukhu, a pond dating back to the Lichhavi period, is better known as Ta-Pukhu, meaning big pond. Though situated right at the bus stop, it provides a serene atmosphere with its sashaying fish and the stone images of different Hindu and Buddhist Gods.

Surya Binayak is one of Kathmandu’s most popular pilgrimage spots, 12 kilometers east of the center. It has been positioned in such a way to catch the first rays of the sun in the morning. Situated in a thick forest to the south of Bhaktapur, it is a 20-minute walk from the trolley bus terminal. The temple, dedicated to the Hindu deity Ganesh (the Elephant headed God) is crowded with devotees especially on Tuesdays and Saturdays. It is also one of the favorite picnic spots offering elegant views of Bhaktapur and other attractive landscapes.

Thimi (population 48,000) is a farming town situated 8 km east of Kathmandu on the way to Bhaktapur. Exquisite temples and other religious shrines dot its streets. It is known for its artistic masks and earthen pots, often seen spread out on the streets to dry in the sun. It can be called a traditional pottery locality with almost 80% of the population still involved in pottery. Handspun cotton cloth is another Thimi specialty.

Sight-seeing can be done on foot in the city core areas; for outlying spots, hire a car or take the bus. Travel agencies in Kathmandu offer a variety of half-day and full-day guided tours. The following combinations of tourist sites make for a pleasant half-day of sight-seeing:

We offer a 2-day/1 night Valley Rim walk of moderate exercise and fresh air with excellent views of the peaks from the Valley’s southern rim, seasonal birds and village life. Camping arrangements or overnight stays in clean comfortable lodges.

Two days /one night - camping or overnight in comfortable lodge - $250. per person, includes guide, lodge and or camping arrangements, food, and transport to and from your hotel in Kathmandu.